As mentioned earlier, if an individual has been experiencing the symptoms of GERD for more than ten years, the risk of Barrett’s Esophagus in such a patient is reasonably higher. A few of the other accentuated risk factors of Barrett’s oesophagus include the following:

Unfortunately, Barrett’s Esophagus doesn’t have precise symptoms which pinpoint the condition. However, owing to the fact that majority of the patients are also a victim of GERD, frequent instances of heartburn have been reported by the patients. As a general principle, it is recommended to immediately consult your doctor if you are experiencing the following symptoms: 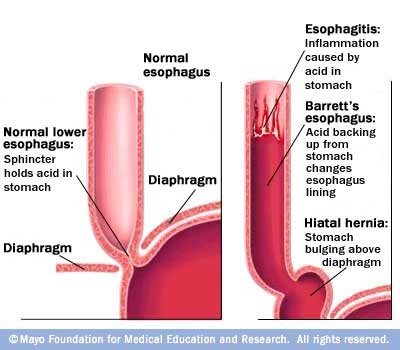 There are varies options for treatment of Barrett’s Esophagus which are determined by your doctor after evaluation of the extent of dysplasia.

No or Minor Dysplasia:

Provided that you are fortunate enough to have a non-existent or minor grade dysplasia, your doctor will recommend a few medications which will primarily be focused at antagonising the GERD symptoms. H-2 receptor antagonists and the proton pump inhibitors are two of the commonest drugs used in such patients.

The alternative option of surgery is also at your disposal to address the symptoms of GERD permanently.

Two of the common surgical treatments for such patients include the following:

During this treatment, LINX device is inserted through the oesophagus by your doctor. The metal beads of LINX device serve the purpose of establishing magnetic attraction to prevent the leakage of stomach contents back into the oesophagus.

The Stretta procedure is carried out with the help of an endoscope. Radio waves serve the purpose of causing a muscular change near the junction of oesophagus and stomach. By strengthening the muscles, this treatment helps to prevent the reflux of stomach contents back into the oesophagus.

In the event of major dysplasia, more invasive procedures will be recommended by your doctor. The use of endoscopy, for instance, is common in such circumstances for the purpose of removing the portion of the oesophagus that has been affected. In worse situations, entire part(s) of the oesophagus may have to be removed. Other treatment options (at your disposal) include the following:

Radiofrequency ablation makes use of an endoscope that is associated with an attachment that produces heat. The heat is primarily focused on the abnormal cells to kill them.

Cryotherapy makes use of a dispensed gas or liquid via an endoscope that essentially freezes the malfunctioning cells. Once thawed, the cells are frozen again, and the procedure is continued until all the abnormal cells are dead.

As the name suggests, this treatment involves a light-sensitive chemical which is commonly referred to as the Photofrin or Porfimer. It is injected into the patient’s body. After 24 to 72 hours of injection, endoscopy follows, which essentially activates the chemical with the use of a laser. The activated chemical helps in killing the malfunctioning cells.

All of the treatments are to be carried out with extreme caution and precision since there are various complications associated with them. This is why it is recommended to get follow-up appointments after the treatment to ensure monitoring of the oesophagal lining. This will better equip your doctor to address the complications at very early stages.