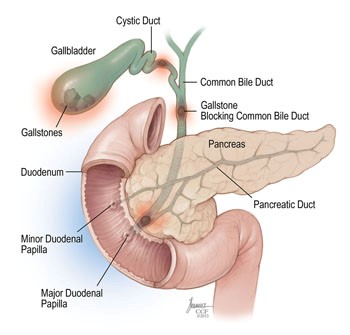 Cholecystitis is a condition in which the gallbladder faces inflammation mainly due to the presence of stones. But it has various other reasons as well, which will be discussed later in this article.

Basically, gallstones block the tube that comes out of the gallbladder, and hence a patient faces the condition known as ‘cholecystitis’. The inflammation is rather a symptom which is caused by the buildup of bile within the bladder.

The gall bladder is one of the most vital organs in the human body which helps in the digestion of fat. So if it gets compromised, you are on the verge of facing severe abnormalities in the natural working condition of the gut.

Cholecystitis requires immediate medical attention, and if not treated promptly, it might result in chronic cholecystitis which is quite difficult to treat and may result in the rupturing of the gall bladder.

As discussed earlier, the biggest causes of cholecystitis are gallstones which block the bile duct and hence the gallbladder gets inflamed. However, there is an array of mainstream reasons mentioned below:

There are multiple types of cholecystitis. Let us now explore each of them categorically. 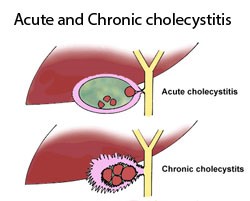 In this type of cholecystitis, the bile duct is blocked by gallstones which contribute to retention of the bile juice within the gallbladder. As a result, the bladder gets thick and inflamed, making it a reddish and tense piece of meat.

If it is not dealt with strictly, inflammation might affect the surrounding organ, hence sabotaging the efficiency of closely located organs.

Moreover, the disease is gender biased and seems to affect men more than women,

It is probably the worst form of cholecystitis an individual could ever face. Most of the times, it occurs due to gallstones blocking the bile duct, but the reasons are not confined to a few.

Typically, chronic cholecystitis occurs due to the recurrence of cholecystitis, and it might lead to some other significant diseases.

It should be noted that XGC (Xanthogranulomatous cholecystitis) is another complicated type of chronic cholecystitis which resembles that of cancer but actually, it is not cancer.

Since gallbladder is located in the upper part of the abdomen, the most common symptom is upper abdominal pain which is quite rational to understand. However, there might be an array of other mainstream symptoms faced by the individual which are discussed below:

If your doctor doubts any probability of cholecystitis, he might prescribe one or more of the following tests. However, it should be noted that these tests might not always be accurate so most of the times, it is crucial to undergo multiple tests to eliminate any chances of mistake.

It should be noted that if a patient is on dialysis, then the use of contrast agents must be avoided under all circumstance unless there is not any other option left.

However, if your doctor is not satisfied by any of the reports or thinks that a more detailed approach is required, a liver function test and blood CP might also be suggested to assist in reaching a conclusion.

Rationally, the course of therapy depends upon the intensity of pain and severity of cholecystitis. In sophisticated or rather complicated cases the treatment may initiate with the patient being hospitalised for monitoring and carrying out an array of tests.

For the very basic treatment (generally to diminish the intensity of pain), your doctor may advise you to fast (stop consuming solid and liquid), and a bunch of IV fluids might be injected to save you from dehydration. Moreover, a couple of painkillers and antibiotics might also be suggested to sabotage pain and cut off the probability of getting or spreading an infection.

However, the typical and most obvious treatment is the removal of the gallbladder by conducting a surgery called cholecystectomy which is usually performed by the least invasive approach ‘laparoscopy’.

After the operation, you would not be barred from consuming all kinds of food items because your gut can still digest it as a result of bile redirection from the gallbladder to the small intestine.

It should be noted that treatment is always better than cure. So, instead of living a lethargic lifestyle and allowing your body to keep growing uncontrollably, you should live a healthy and active life. When we talk about living a healthy life, the primary focus should be on maintaining a constant and reasonable weight and exercising regularly.

Since cholesterol is considered to be a major stakeholder in aggravating your chances of cholecystitis, emphasis should be given on eating less fat (do not eliminate it from your diet!).