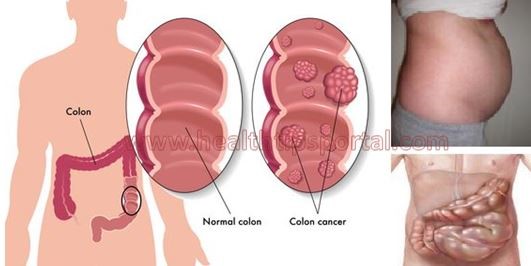 Large intestine of the body is also referred to as the colon. Since it the last segment of the digestive system, the colon is responsible for enabling absorption of water and salts out of the solid waste which is moved through the rectum to be excreted out of the body via the anus.

A widespread growth of cells that gets out of control is known as cancer. When such an outburst of overgrowth occurs in the colon, it is called the colon cancer. Adenomatous Polyps, which are primarily benign tumours, are smaller in size and begin to develop in the large intestine on the inner walls. Such tumours, if left untreated, can ultimately lead to the formation of a full-fledged colon cancer.

As stated earlier, all healthy cells of the human body have a programmed mechanism for growth, division, and ultimately death. Such a process of programmed cell death is known as apoptosis. The failure of apoptosis, which essentially enables the colon cells to grow and divide out of control without dying off, is what leads to colon cancer. While the exact mechanism of apoptosis failure is not known, a few of the risk factors identified in the case of colon cancer are as follows:

During early stages of colon cancer, it is quite common for the patients to experience no symptoms at all. Oncecancer moves into later stages, following symptoms have been commonly found to be associated:

In the event of metastasis (a spread of cancer to other body parts), additional symptoms will also be associated depending on the part of the body that cancer has spread to.

There are some factors which determine a suitable treatment of cancer including its size, the extent of metastasis, health status, age, and a few other personal characteristics including the tolerance level. The prominent options for treatment of a colon cancer include radiation therapy, chemotherapy, and surgery. However, the primary aim of each treatment is to either eradicate cancer from the body or cause a significant reduction in the pain and other symptoms associated with it.

Removal of a small part or perhaps the entire colon is commonly referred to as the colectomy. It is a practice whereby the surgeon removes a segment of the large intestine affected by cancer as well as a part of the marginal area that surrounds The extent of colectomy determines whether or not there is a requirement of removing lymph nodes surrounding the affected portion of the colon. The unaffected part of the large intestine is then attached to colon or the stoma (abdominal wall opening). Other surgical alternatives include endoscopy for small and localised cancers, laparoscopic surgery, and palliative surgery that focuses on relieving the blockage as well as a few other inhibitions in the colon to deal with the symptoms of bleeding, pain, etc.

Chemotherapy aims at disrupting the DNA of cancerous cells as well as their proteins to prevent their division and ultimately force them to die. While all of the rapidly dividing cells, which may even not be the cancerous cells, are affected by chemotherapy. Unlike cancerous cells, the normal ones have a capability to recover from such an induced damage to the DNA and proteins. There still are a few side effects of chemotherapy including nausea, hair loss, vomiting, and fatigue. It has recently been researched that persistent low-dose of aspirin tends to significantly improve the probability of survival in the patients with colon cancer. While the mechanism has still not been established, it certainly offers a new alternative for an adjunct treatment. It is commonly utilised in the event of metastasized cancer since the medicine has a natural proclivity to spread throughout the body.

Radiotherapy aims at making use of high-energy radiations which are focused on the cancerous cells to destroy the molecules which are essential for its survival. High energy gamma rays, such as from the metals like radium or x-rays, are the commonest ones used in radiotherapy. The treatment can be utilised as a standalone option as well as a part of the combination therapy to destroy cancerous cells. Radiation therapy is hardly ever used for early stage colon cancers but becomes a necessity in the event of late stage cancer. Side effects include changes in the skin (colour) which are quite similar to the sunburns, vomiting, diarrhea, weight loss, nausea, and loss of appetite. A few weeks after the therapy, however, most of the side effects begin to fade away.

It is evident from the information mentioned above that while there are options available for treatment of colon cancer, it is vital for the survival of the patient to get the disease diagnosed in its early stages, perhaps before the metastasis begins. Remember, like any other cancer, the treatment of colon cancer is a painful one and costs a significant amount of money which is why it is recommended for everyone to take the risk factors very seriously to prevent such a shaking experience.