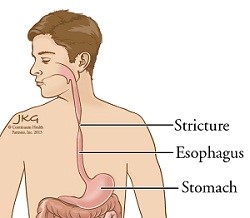 The passage that connects the stomach with throat (known as the oesophagus) can experience a narrowing in structure due to certain reasons. Such a condition is commonly referred to as the Esophageal Stricture.

Oesophagal Stricture is usually due to the inflammation ofoesophagal lining which may be caused because of the stomach acid, accidental swallowing of irritants or a wide range of other harsh chemicals. Inflammation of the oesophagal lining (known as esophagitis) and subsequent scarring of the tissue is the leading cause that obstructs the oesophagus and makes it harder for the food or even fluids to reach the stomach.

Oesophagal Stricture can be caused due to a wide range of reasons. The GastrEsophageal Reflux Disease (GERD) that causes gastric acid to be persistently refluxed back into the oesophagus is an accentuated underlying cause of the (above mentioned) medical condition. GERD, however, is a subtle reasonfor causing Esophageal Stricture. Such an underlying medical condition is also commonly associated with Scleroderma or Systemic Sclerosis. As mentioned earlier, accidental swallowing of lye or a bevvy of other irritants and harsh chemicals can aggravate inflammation of the oesophagal lining as well. A stricture may as well be caused due to an allergic reaction to a particular medicine or perhaps if the pill is lodged in the esophagus and begins irritation of the oesophagal lining. It is indispensable to mention here that a few medical treatments, which a patient may have received in the past, may also contribute to the occurrence of Esophageal Stricture. Such medical treatments include an endoscopy that may have accidentally injured the passageway, an oesophagal surgery, or perhaps a persistent utilisation of a nasogastric tube that is commonly used in hospitals for the purpose of feeding patients.

In the worst case scenario, narrowing of the oesophagus may as well be the reason for underlying cancer.

A few common symptoms which are usually associated with the oesophagal stricture are mentioned below:

Prevention of Esophageal Stricture can be ensured by following a few simple and easily implementable remedies. To begin with, it must be ensured that in the event of having to take a pill, one must have a full glass of water to prevent lodging of the pill in the passageway.

All sorts of irritants and chemicals which are commonly available in a house must be stored at a place where the access of children could be prevented easily.

Lastly, an occurrence of Esophageal Stricture cannot be addressed appropriately without dealing with gastro oesophagal reflux by an aggressive treatment.

A proper diagnosis of Esophageal Stricture is made after careful evaluation of some steps. To begin with, medical history of the patient is analysed, and a few physical examinations are carried out. Barium x-ray study is imperative for the diagnosis of Esophageal Stricture since the consumption of barium helps a lot in creating a rather detailed and sharp image of the patient’s oesophagus on an x-ray.

Lastly, endoscopy is commonly used for the confirmation of diagnosis. During endoscopy, the patient is given anaesthesia to insert an illuminated scope through his mouth into the oesophagus. This is what provides an even clearer picture of the oesophagal lining which confirms the diagnosis.

The treatment of Esophageal Stricture begins with a few of the home remedies. To begin with, your doctor will recommend changing your diet to purely fluids and soft foods unless your natural swallowing capacity and efficiency has been restored. Esophageal Bougienage, in which the oesophagus is mechanically dilated, is put to use for the purpose of widening the narrowed passageway. Provided that the underlying cause of Esophageal Stricture is determined to be the GastrEsophageal Reflux Disease (GERD), certain drugs including the acid-blocking medicines as well as the proton pump inhibitors are recommended. This is what prevents the recurrence of the stricture.

In the event of a severe stricture, surgical treatment may as well be used to remove a certain part of the oesophagus (affected by the stricture) and replace it with a tiny part of the large intestine. However, since all patients with such medical conditions are not suitable for surgery, a few of them may have to use a feeding tube that is pushed through the narrowed oesophagus. An alternative option at the disposal of such patients is to opt for gastrostomy which makes uses of a tiny tube that is lodged in the stomach and ensures complete bypass of the oesophagus track, in the first place.

When Is It Time To See Your Doctor?

To detect Esophageal Stricture at an early stage or perhaps to avoid it entirely, it is recommended to immediately give your doctor a visit if you have been having difficulty in swallowing food regularly.

If you or someone in your household has accidentally swallowed a corrosive material, immediately call the ambulance and go to the hospital.

If a certain chunk of food has permanently been lodged in the oesophagus and seems impossible to be moved through even by drinking water, it is time for you to go to the emergency room. Remember, the sooner you take care of the medical condition, the fewer are going to be the complications.