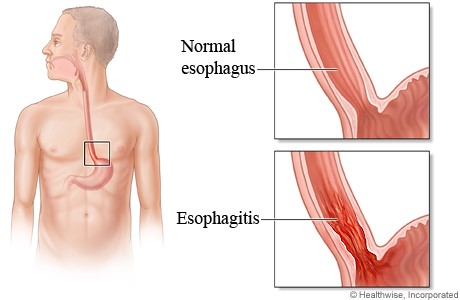 Separated by fragile membranes, all of these diseases fall under the same category and to a major extent, their causes, symptoms and treatments are all the same. So, we will discuss them collectively here.

The major differentiation between these three primarily comes from the difference and correspondence in their respective names.

Esophagitis is the inflammation (or irritation) of the oesophagus (a tube or a pipe-like structure which carries bolus from throat all the way down to your stomach). Esophagitis is not confined and has some kinds including reflux esophagitis, Barret’s esophagitis and infectious esophagitis, each corresponding to a cause that results in the condition.

Both gastritis and duodenitis share same causes, but the situation gets a little different in the case of esophagitis so that we will deal with them categorically.

Well, before we move on to explore an array of causes for these two diseases, let us agree on the fact that the most crucial and widespread cause of gastritis and duodenitis is H. Pylori infection because it explicitly targets the stomach lining and could lead to dangerous conditions as well. It should also be noted that this bacteria could be transferred from person to person, so an utmost care is required to prevent its spread. Well, there is good news for all Americans that its spread through interpersonal means is quite less here because of high hygienic standards.

Esophagitis can cause a great variety of symptoms including:

Particularly if these conditions last for a couple of days and seem to be aggravating, you need to contact the doctor immediately. Otherwise, the conditions might lead to a medical emergency where severe constriction of the esophagus is expected to occur.

In the case of gastritis, some or all of the following symptoms might occur:

Likewise, the symptoms of duodenitis are not quite different from the ones mentioned above. Let us have a look at them now:

Before the beginning of any treatment, a comprehensive and certain diagnosis must be performed to get a very clear picture of what is happening inside the body.

Typically, an endoscopy and biopsy might be performed, and as soon as the results are retrieved, the doctor should pursue a treatment that he finds reasonable for your condition.

In the case of esophagitis, several types of medications exist. Like, if the acid production needs to be halted, your doctor might ask you to do a course of certain PPI(s), which could potentially block or pause the acid release. In other cases where H. Pylori is considered to be the primary cause of disease, antibiotics might be prescribed. Some doctors recommend broad-spectrum antibiotics while others prefer more specific medicine it all depends on your condition. In extreme cases, surgery might be required, especially when there is a thread of wall puncturing. Furthermore, all of these treatments or medications might be accompanied by other ingredients to treat symptoms and lower the suffering. For instance, you might be advised to take painkillers, anti-inflammation drugs and other nutritional supplements injected into the body.

In the cases of gastritis or duodenitis, diagnosis is same as in the case of esophagitis. However, a little more emphasis is laid upon the stool test to detect any presence of H. Pylori. As soon as the diagnosis is complete, following course(s) of action might be pursued:

PPIs or just over-the-counter acid inhibitors could be used to sabotage or diminish the amount of acid produced in the gut because if that production stays higher, you are always on the verge of aggravating the seriousness of your condition. Since H. Pylori is one of the major contributors in this regard, antibiotics are quite likely to be advised to halt the spread of infection. For most of the people, the course might be prescribed for at least two weeks (twice the duration for mainstream infections). Moreover, antacids might also be prescribed not only to suppress acid production but to prevent painful conditions as well.

However, the best treatment, imposing least side effects revolves around making significant lifestyle changes. The consumption of spices, alcohol and fizzy beverages must be reduced to a great extent if cannot be given up.

If the pain gets intolerable, high-grade temperature persists for a couple of days, tarry faeces occur, and blood vomiting occurs, then you must seek a professional advice and get yourself treated without any delay. Otherwise, the condition might become chronic, leading to the ultimate disaster of cancer and bleeding within the gut.