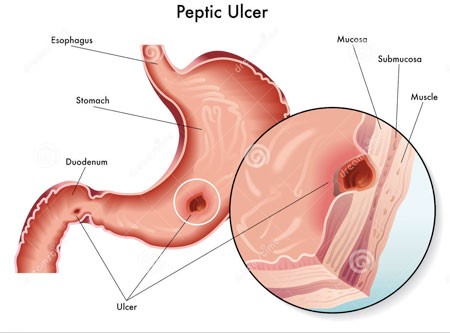 Peptic Ulcer Disease, more commonly known as the stomach ulcer, is a medical condition in which the stomach, duodenum or oesophagal lining gets broken, and the individual faces a sore feeling in the gut.

Getting specific about its types, an ulcer in the stomach is renowned as a gastric ulcer, and if it targets the first part of the intestine, then it is termed as the duodenal ulcer.

Unfortunately, none of the studies has yet been able to give a verdict on what causes the Peptic Ulcer Disease, but we are sure of just one major fact. It is primarily caused by an imbalance in the stomach’s digestive fluids, and it could have an array of reasons. Let us now have a look at an array of possibilities that might cause a stomach ulcer.

Just to make things a bit clear, this is the main culprit as it causes approximately 60% of the ulcers worldwide. It results in a severe inflammation because of its inhibition in the antral mucosa. Therefore, even though the ‘foreign agents’ are visible to the immune system, it cannot just attack them straight away. In fact, it cannot sabotage the H. Pylori infection.

Thus, the bacteria help increase the production of gastritis which further stimulates the release of gastric juice. As a result, the amount of acid in the stomach increases significantly, and the erosion of stomach lining occurs.

Occasional stresses are perfectly normal; in fact, every human suffers from it multiple times in life. But when the stress prolongs over a vast period, there is a lot to be worried about!

So basically, stress causes the release of stomach acid, and definitely, prolonged stress encourages its release for an even longer time. Therefore, it could also cause the erosion of stomach lining.

These are the painkillers, and the most common ones include aspirin and ibuprofen – we all know about these two at least!

Their consumption also causes the deterioration of stomach lining to occur.

A less healthy diet is always on the verge of aggravating an array of diseases. However, as hypothesised in the 20th century, spices do not always pose a significant threat to the stomach lining and nor does the caffeine. Well, it does not mean that they do not pose any threat at all – the intensity is just under the table!

Furthermore, alcohol consumption, particularly during the period of H. Pylori infection, is one of the primary culprits in the roughening of your stomach wall!

Well, it is not necessary to undergo any symptoms when you have an ulcer, but it ultimately depends on the intensity of the disease. So, just in case any symptom occurs, let us have a look at what it could be:

Furthermore, the symptoms might get a step forward, making an individual undergo burning sensation in the stomach which could last from 30 minutes (least) to 3 hours (maximum). Unfortunately, this pain or rather the burning sensation is not quite intense and is often confused with indigestion or in the worst scenario, as a mere hunger pang! The intensity of pain tends to increase when the ‘dirty spot’ comes into contact with acid. However, it could be controlled handily by eating something as it suppresses the production of stomach acid for a while.

It should be noted that not every individual suffering from PUD is bound to undergo these symptoms. The nature, intensity and even occurrence of these symptoms are related to the patient’s age and the location of the ulcer in his gut. However, if we typically talk about the elder ones and children, none of these symptoms is likely to occur. So, unfortunately, most of the times, we never know whether they have PUD or not unless the complications start occurring.

Often, the ulcers tend to heal on their own, but even then, you are not on the liberty to ignore their symptoms at all! Otherwise, more serious problems might occur including gastrointestinal bleeding, puncturing of the stomach wall and cancer as well.

For doctors, it is not a hefty task to determine (just over a table talk) whether an individual is suffering from ulcer or not. As soon as the diagnosis is complete, the course of treatment could follow any or even all three of the ways including lifestyle changes, specific medication and surgery.

You must have observed that most of the factors discussed in the section of ‘causes’ correspond to a lethargic and unhealthy lifestyle. Therefore, if you just improve your lifestyle, get close to nature and be active, you could add a lot of value to your gut and sabotage any ulcer within!

For instance, eat fewer spices, eat fresh, quit alcohol and smoking and do not prefer any NSAID.

What is an acid? Well basically, whatever release protons is called an acid. So to sabotage these ‘pumps’ to release protons and make your gut’s environment more acidic, we use Proton-pump Inhibitors to reduce the acidic levels and allow the stomach lining to heal on its natural course.

Among all the culprits causing and aggravating PUDs, H. Pylori infection is the major contributor and probably the greatest! Therefore, the use of antibiotics could be pivotal as their consumption would do targeted activity and halt the spread of infection and ultimately, kill the bacteria.

In some cases, the doctor might use a certain combination of an antibiotic with PPI to yield best and most efficient results, but it all depends on your condition and the course of action required.

If your ulcer starts bleeding, it could be controlled by carrying out an endoscopy but in the worst cases, if your stomach wall gets punctured or perforated, then you certainly need a major operation to cure the condition.

However, if someone’s condition has aggravated just because of the overconsumption of NSAID, then probably diminishing its consumption would be the best option.